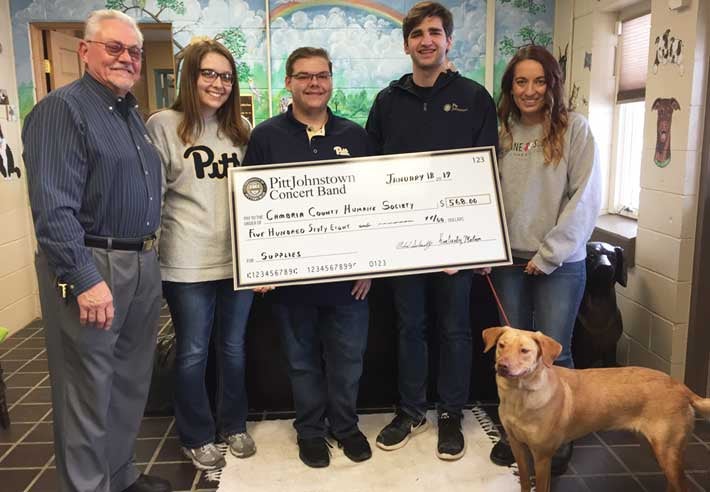 The Pitt-Johnstown Concert Band presented the Cambria County Humane Society with a check for $568 on January 15, 2019.

The funds were collected as contributions at performances this past year. The concert band held a similar drive last year as well. Donations will be sought this year as well, beginning with the April concert.

“As with past years, we asked for donations for the Humane Society during our free fall and spring performances,” said Michael Bodolosky, executive director of the Pasquerilla Performing Arts Center, adjunct music instructor, and band director at Pitt-Johnstown.

The University of Pittsburgh at Johnstown was founded in 1927 and is the first and largest regional campus of the University of Pittsburgh. Pitt-Johnstown is recognized by the Princeton Review as a “Best in the Northeast” college, by G.I. Jobs as a “Military Friendly School,” and by Pennsylvania Business Central as a "Top 100 Organization.” The distinctive combination of Pitt-Johnstown’s people, programs, and place results in exceptional performance in preparing students for career and professional success. Pitt-Johnstown