The University of Pittsburgh at Johnstown cut the ribbon on the university's $5 million Chemical Engineering Building on March 21, 2019, marking another major step forward for a chemical engineering program described by university President Jem Spectar as “a key part of our long-term strategic vision.”

The two-story, 7,000-square-foot building has been under construction since last February, connects to the east side of the John P. Murtha Engineering and Science Building and houses laboratories, classrooms, faculty offices and study areas.

“This is another day of celebration,” Spectar said Thursday, describing the new building as “a place where a strong community is made possible when you build a foundation for talent that is competitive, not just here, but nationally and globally.”

Michael Marr, business integration lead for Shell Appalachia, said that the construction of the new Chemical Engineering Building was part of the process of creating a “new talent pipeline that companies like Shell will access in the future.”

He pointed to the multi-billion-dollar chemical plant currently being built by Shell in Beaver County, northwest of Pittsburgh, as one of that pipeline’s endpoints. The so-called “ethylene cracker plant” is expected to produce 1.6 million tons of polyethylene, a common plastic, per year once it goes online in the early 2020s, according to Shell.

“We recognize that in order to design, build and operate a chemical plant in the 21st century, you can’t build without engineers,” Marr said. “They are critical to our business and to many other businesses. … We appreciate the university building this building here because, without the buildings to teach the engineers, you don’t have the engineers, of course, and without engineers, you can’t run businesses like Shell does here in Pennsylvania and around the world.”

“In addition,” Singh said, “we have a simulation lab where students will learn real-world, hands-on skills by operation and troubleshooting chemical processes in virtual environments.”

Cambria County President Commissioner Thomas C. Chernisky said Thursday that Pitt-Johnstown’s chemical engineering department “will graduate students who can be competitive in the 21st-century marketplace” and will “produce talented and skilled chemical engineers who can work here in Cambria County, in our region and across the Commonwealth.”

“Supporting the University of Pittsburgh at Johnstown’s chemical engineering department is one of the most important economic development projects in our region,” he said.

Bostwick Design Partnership was the architect for the Chemical Engineering Building, and Massaro Corp., of Pittsburgh, was the construction manager. The H.F. Lenz Co., of Johnstown, also worked on the project, according to Pitt-Johnstown officials. 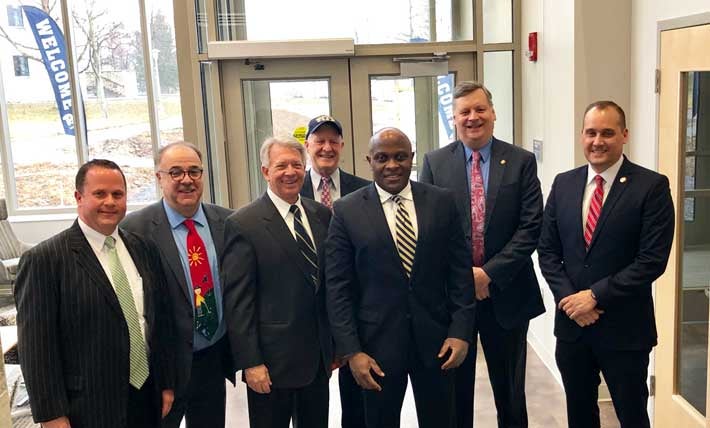