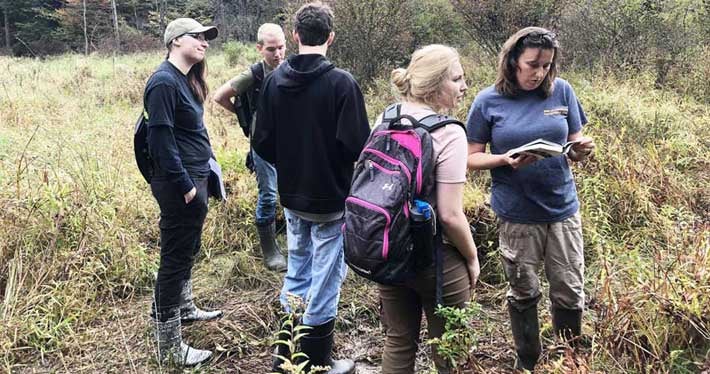 Pitt-Johnstown students worked on a real-world project at a future watershed/nature-education center in Ebensburg Borough on October 4.

“A wetland delineation is one of the most common things an environmental scientist deals with professionally,” Schaney told The Advocate, Pitt-Johnstown’s student newspaper. “They look for signs of a hydric soil, which are usually the gray color. That’s the center of their plot.”

The area is called Nathan’s Divide according to Dave Lester, president of a board of directors who are working to establish an educational nature center and an outdoor recreation area on the land surrounding a Cambria Township reservoir.

The site is named for 6-year-old Nathan Riggleman, as well as the area’s position atop the Eastern Continental Divide, Lester said he and his wife, Linda, hope to create a nature center that highlights watershed education and environmental responsibility.

Water from the divide flows in two directions toward the Atlantic Ocean, eventually reaching both the Gulf of Mexico and the Chesapeake Bay, Lester said.

Students Chance Eutin and Halee Sesock were quoted in news stories that garnered coverage in an Altoona Mirror story that was reprinted by The Washington Times and The Idaho Statesman.