Eleven University of Pittsburgh at Johnstown students have spent a year working on two projects with Professor of History Paul Douglas Newman, PhD, for the Mountain Playhouse in Jennerstown.

Eighty Years at the Mountain Playhouse: Summer Stock Lives! is a 100-page book, illustrated with 160 images.

“The Show Goes On!: 80 Seasons and Counting at Jennerstown’s Mountain Playhouse” is a 15-minute historical documentary film with over one-hundred still and moving images and several interviews.

Both works chronicle the history of the Mountain Playhouse – located in Jennerstown, Somerset County – and the phenomenon of Summer Stock theater.

In fall 2018, Jonathan Van Dermark (history and geography) joined the project and researched the theater founder’s private archives. Kelsey Chabal (writing and theatre arts) was added at that time as editor and writer.

The book has finished final production by the publisher, the Somerset Daily American, and will be available for purchase in June 2019. The students and Dr. Newman will hold a book launch and signing party on opening night of the Mountain Playhouse on Wednesday, June 18.

The Mountain Playhouse is an 80-year-old theater. James B. Stoughton constructed it in 1938 from pieces of a log building that had been built as a gristmill to make flour in 1805. It has offered seasonal entertainment, resident Summer Stock plays and musicals, for eighty seasons. Summer Stock referred to small theater companies, who owned their own stock of costumes and set materials. They provided residence for actors, directors, and crew to live during summer performances in rural locations out of the heat of the cities.

At its height, there were more than 150 Summer Stock theaters in the northeast United States. Today, only eight remain. The book and  film both tell a story of innovation, entrepreneurship, and survival. 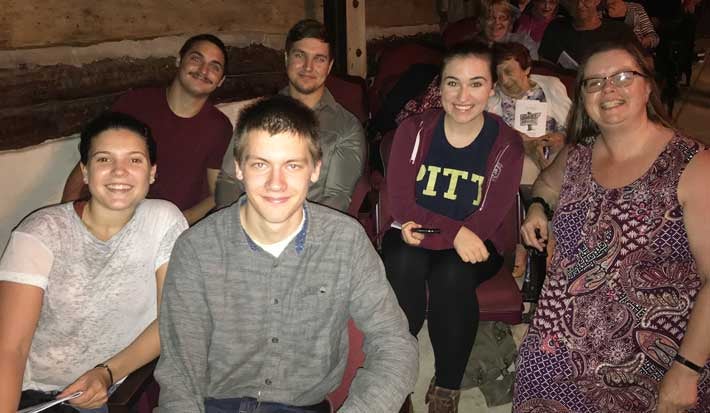