Carrie Albright ’18 said she had always dreamed of working in sports. In her case, life happened faster than one can dream. 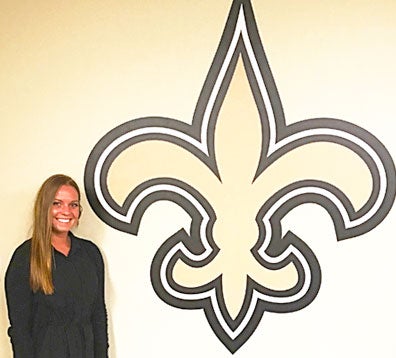 A month after she received her Bachelor of Arts degree in Marketing and Management from Pitt-Johnstown in April 2018, she began her role as an inside sales representative for the New Orleans Saints and Pelicans. Then, in February 2019, Carrie became an account executive for the NFL and NBA teams, which are managed by the same ownership group.

“My dream job has been to work in sports ever since I was little,” said the Norwin High (Westmoreland County) graduate.“I never really knew what I wanted to do in sports until my senior year of college. My long-term goal is to be a manager or a director.”

The first step in her rapid journey was to attend a sports job fair at Robert Morris University during her senior year. It was a merger of fate and preparation.

“Without knowing, I sat down next to a former Vice President of ticket sales of the NBA,” she said. “We started talking and he asked ‘do you want a job?’ Right away, he took me over to talk to the Executive Director of Ticket Sales with the Saints and Pelicans.”

She said they remained in touch for a few months, a more formal interview was set up, and she was eventually hired. Carrie imparted advice to those seeking a job with that perfect fit.

“Be willing to step out of your comfort zone and do not give up,” she said. “I was always told by everyone ‘you’re never going to get your dream job right out of college,’ and that I would have to work in minor league sports at first.

“Looking back, I will never believe anyone that says that because I landed my dream job without even applying to any jobs. It’s all about hard work, being confident, and having a positive attitude.

“I recommend going to as many job fairs and networking events as you can, because that is what will get you the job,” she said.

A sports adage states that winners create their own luck. Carrie’s good fortune was achieved through her Pitt-Johnstown experience. She credits the Business and Enterprise Division's team effort.

“I found that practicing my communication and public speaking skills daily at Pitt-Johnstown has helped me the most in this role,” she said.

“My sales class with professor (Grace) Markum has helped me the most. No one else on my team (of 10 people) has had a sales class in college, so I definitely took that to my advantage.  Also, Dr. (John) Byrne’s classes have helped me because he really challenges you and teaches you how to be out of your comfort zone and everyday I have to step out of my comfort zone.

“Professor (Corey) Christman’s Ethics & Leadership class has helped me prepare for this by getting my resume together, preparing for interviews, and – most importantly – preparing for the job fair at Robert Morris.”