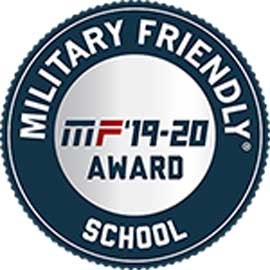 For the 10th consecutive year, the University of Pittsburgh at Johnstown has been named to the coveted Military Friendly School list by Victory Media, the premier media entity for military personnel transitioning into civilian life. The 2017 Military Friendly Schools list honors the top 15 percent of colleges, universities, and trade schools in the country that are doing the most to embrace America’s military service members, veterans, and spouses as students and ensure their success on campus.

Pitt-Johnstown President Dr. Jem Spectar commented, “To be recognized with this prestigious honor for the seventh year is a tremendous source of pride for the Pitt-Johnstown community. We are very grateful for the service of our military veterans and are strongly committed to their success as they transition from their military careers to the classroom, to good jobs in our community, and beyond.”

Each year, President Jem Spectar hosts a Veterans Day tribute recognizing faculty, staff, students, and Advisory Board members who have served in the US military. Pitt-Johnstown enrolls an average of more than 40 veterans and active military personnel each year.

On Veterans Day 2011, Pitt-Johnstown unveiled The Heroes Memorial, a first-of-its-kind memorial honoring the military men and women whose lives were lost in Afghanistan and Iraq.

At the center of The Heroes Memorial is a 3,500 pound steel I-beam from the World Trade Center, surrounded by the names of the more than 3,000 victims of September 11, 2001, as well as the names and ages of military personnel killed in Afghanistan and Iraq.

The Heroes Memorial continues to draw visitors from throughout the United States who are moved and inspired by the tribute that the University has made to our fallen heroes. Updated annually, the Memorial now contains the names of more than 9,500 men and women, the majority of whom were college-age citizens. The Memorial also pays tribute to the more than 46,000 members of the military who have been wounded in hostile action in Afghanistan and Iraq.

The Military Friendly Schools media and website, found at www.militaryfriendlyschools.com, feature the list, interactive tools and search functionality to help military students find the best school to suit their unique needs and preferences.

The list of Military Friendly Schools was compiled through extensive research and a data-driven survey of more than 8,000 schools nationwide approved for GI Bill® funding. The school survey, methodology, criteria and weightings are developed with the assistance of an independent advisory board of educators and employers, and independently tested by Ernst & Young LLP based upon the weightings and methodology established by Victory Media. The survey is administered for free and is open to all post-secondary schools that wish to participate.