Educator With a Passion for World Cultures

A childhood fascination inspired by tales of faraway lands has given a recent Pitt-Johnstown graduate both the wanderlust and commitment for a career in international education. In August 2014, Lisa Marie Slippy ’12 was packing her suitcase in preparation for just the latest foreign posting in her varied personal itinerary. Not for the first time, Gordon and Ruth Ann Slippy would see their daughter off to her next adventure in another country, a new life in a strange culture — this time to the Czech Republic, for a teaching opportunity in Prague.

“I have always been interested in meeting people from other countries,” said Slippy. “Relatives who traveled would bring presents from abroad, and I knew I would travel, too.” At age 14, she got her chance when she volunteered to join a mission-related construction project in Mexico. “I was learning how to plaster,” she recalled, “until a hurricane interrupted our trip and we had to cross back into the States for safety’s sake.”

Other opportunities followed during Lisa’s high school years in Pittsburgh: a stint in a Native American community in Kiowa, Oklahoma, as well as a mission trip to Atlanta to work with homeless people. By the time she enrolled at Pitt-Johnstown as an education major, Slippy was an old hand at opening both her head and heart to new people from different cultures, and finding her niche, making her own contribution in whichever situation she found herself.

During the summer of 2011, fresh out of Professor Bill Kory’s “Geography of Africa” course, Slippy joined a Youth with a Mission (YWAM) project in Arusha, Tanzania.

“It was my first time on a plane, and I was traveling alone,” she explained. “It was a real learning experience, a test of my theory that I could do this.”

The first leg of the trip was to Ethiopia, and it proved interesting, to say the least.

“The Harlem Globetrotters were on the plane, en route to Ethiopia! I also spoke with a guy — an American who was getting married to an Ethiopian girl.”

On to Kenya and finally to Kilimanjaro, then overland to her home for the next three months, Arusha.

“I taught ‘class five English’ at an elementary school, which is roughly fifth grade, and art,” she said. Art supplies were limited. “We saved scraps of paper — we were thrifty — and shared crayons and paints. Some of my students were very talented.” 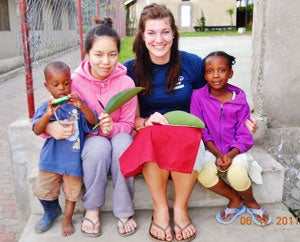 She was the sole American living with other volunteers in a compound formed by tall thorn bushes. Clearly, she loved every minute of her time in Tanzania. “I was sad to leave,” she admitted. She hopes to return to Arusha someday.

In the fall of 2012, Lisa’s freshly-minted teaching degree earned her a post at a Christian American school in Accra, Ghana, where she would teach students who hoped to continue their educations at U.S. universities. She was back in Africa, and found Ghana to be a world apart from Tanzania.

"Tanzania’s cuisine is similar to Indian food, with spices and curries,” she explained.

“In Ghana, the ingredients are more like Caribbean food, with cassava, plantain, mango, pineapple. Also fish and ‘jollof’ rice, a sort of stew. And banku and fufu — these are balls of a sort of bread dough that you dip in stews. Always with your right hand — it is considered rude to eat with your left hand.”

Thanks to family and friends who chipped in to buy her plane tickets, Slippy made it home for Christmas that year.  She remained in Ghana until summer, 2014, when she applied to teach in a British System school in Prague.

At the Riverside School, she expects to serve alongside faculty from other Commonwealth countries such as Canada or New Zealand. She has already acquired a German roommate, with whom she will share an apartment.

As she contemplated her move to the Czech Republic, Lisa tried to summarize the fundamental lessons she has gleaned from her already prodigious travels. “I do an exercise with my students called ‘Travel and You,” she said. “I make a flow chart on travel impacts, in three steps: you go to a new location, you learn, and what you learn changes you, changes your attitudes.

“People tend to think in absolutes, what things should look like. But in different cultures, you cannot think in terms of good or bad — only different. There are good and bad characteristics in every society, but many things we THINK fit one or the other are actually just preference. It is very important to learn more respect for people of all cultures.”