Researcher and 2002 Biology Grad is an Emerging Vision Scientist 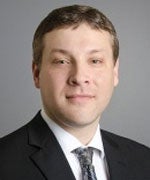 He is a 2002 Pitt-Johnstown graduate and was biology major and served as a research student for Stephen Kilpatrick, PhD, associate professor and Pitt-Johnstown Biology Department Coordinator.

"I remember Michael as an excellent student and a dedicated investigator on a project involving mate recognition in fruit flies," said Dr. Kilpatrick. "He learned to work well independently and to find solutions to challenges in the lab. I am not surprised that he has gone on to become a talented medical researcher."

Farkas joined the University of Buffalo’s Department of Ophthalmology as an assistant professor in July 2016.

The Emerging Vision Scientists program began in 2015 and is a select class of 22 young investigators — reflecting the breadth of basic and clinical vision research from across the United States — who have not yet received their first investigator-initiated grant from the National Institutes of Health (NIH).

Awardees provided on-camera interviews about their research for a summary video and displayed posters of their work during a September reception hosted by NAEVR in Washington, D.C.

They also visited Capitol Hill to meet with members of Congress or their staffs and advocate for continued research funding.

Farkas is studying novel gene therapy strategies for inherited blindness, which is caused by mutations in genes that are important for retinal function.

These diseases may be considered rare, but Farkas noted they affect hundreds of thousands of people in the United States and millions worldwide.

“Currently, no therapies are commercially available to treat these patients,” he said. “However, the eye is one of the most suitable organs for gene therapy, where a correct copy of the affected gene is packaged into a virus, and the virus delivers the gene to the affected cells.”

Farkas said a gene therapy for one type of inherited blindness has completed clinical trials showing that it is safe and can, at a minimum, delay disease onset.

“Since the virus for which we package genes has a limited ‘cargo’ capacity, some of the genes are too large and cannot be used in this manner,” he said. “I have identified smaller versions of some of the most common blindness genes, and we are working to characterize their function and determine their suitability as a therapy.”

Farkas earned his doctoral degree in biological sciences at UB in 2009. He has expertise in areas including bioinformatics, eukaryotic pathogenesis, gene expression, gene therapy, genomics and proteomics, molecular and cellular biology, molecular basis of disease, molecular genetics and stem cells.