Pitt-Johnstown is proud of its highly talented faculty of dedicated teachers and productive scholars, who facilitate the success of highly motivated and ambitious students in an up-close-and-personal learning environment.

Our faculty achievements are as interesting as they are varied.

Catherine S Cox’s paper, “Performative Subjectivity and the Queerness of Anachronism in the Second Shepherds’ Pageant,” has been accepted for presentation at the Modern Language Association (MLA) Convention, in Chicago, in January 2019.

Michael W Cox’s essay "Privileging the Sentence: David Foster Wallace's Writing Process for 'The View from Mrs. Thompson's'" appears in the current issue of Assay: A Journal of Nonfiction Studies. He presented a paper on George Orwell, "Reflection in the Personal Essay: Why We Care About an Elephant's Death a Century After the Fact," at the 2018 Pennsylvania College English Association conference in Bethlehem on March 24. He read from his novel The Best Way to Get Even on a panel of Mammoth Press authors at the Northeast Modern Language Association conference in Pittsburgh on April 13.

Ako Inuzuka will present her paper, “A Dialectic between Militarism and Pacifism: Japan’s Constitutional Amendment Discourse,” at the 2018 Cultural Studies Association conference held at Carnegie Mellon University in June.

Jeremy C Justus served on the Pitt system-wide Technology Accessibility Committee this semester, which resulted in the hiring of an Accessibility Coordinator and the development of an American Disabilities Association compliant policy to be rolled out in the 2018-19 academic year. He also worked with MMDC major Patrick Stahl, JAHA, and the Historic Pittsburgh organization to create a digital archive of Johnstown Flood photographs hosted by the Historic Pittsburgh website.

Marissa Landrigan Justus's book, The Vegetarian’s Guide to Eating Meat, was published in Germany by Benevento Books. Her essay “Skin: A Matroyshka” was published by the journal Hotel Amerika. 2

Derek Leben’s article "In Defense of Ought Implies Can" was officially published in Oxford Studies in Experimental Philosophy. He gave a talk at the Year of Healthy U conference along with Steve Kilpatrick titled "Intelligence, Opportunity, and Enhancement.”

Maryl McGinley will be presenting her paper, "Cultivating Connections: Agrarian Metaphors for Technological Spaces" at the Eastern Communication Association Conference this weekend.

Patty Wharton Michael had two works accepted for presentation at the Eastern Communication Association Annual Conference in Pittsburgh, PA. She presented her paper, “TED Talk insights: Co-Constructing Learning in the Public Speaking Classroom,” and served as a panelist with Susan Wieczorek for the session titled, “Innovating the Public Speaking Course: Delivering High Quality Courses that are Flexible, Affordable, and Efficient.” Additionally, she served as panelist for the panel titled “Immunizations & Vaccinations: Understanding Concerns and Evaluating Risks” at the Healthy U Conference at the University of Pittsburgh at Johnstown. She and Diane Nicodemus and Paul Lucas were awarded a Teaching & Innovation Grant (awarded by the Provost’s Office) in the amount of $16,000 to develop a “One-Button Studio” at UPJ.

Funding for Teaching and Research in Germany Grant (Summer 2018) and the Hewlett International Grant (Summer 2018). These two grants will allow her to do research for a book manuscript about medieval French literature and the representations of Charlemagne in Medieval epic poetry. After spending five weeks in Paris with Pitt students for the Literature in Paris program, she will be staying in Europe and traveling in Germany, the Netherlands and Belgium

Eric Schwerer and Tuangtip Kilnbubpa-Neff presented a panel titled "In Wellness and Distress: Poetry's Marriage to Language, Judgment, Expression, and Healing" at the Healthy U Medical Humanities Conference held in April on our campus.

Susan Wiezorerk in January of 2018 was awarded a “Year of the Healthy U” matching grant scholarship sponsored by the Provost’s Office, the Vice President of Academic Affairs Office, and the Humanities Division to conduct a Medical Humanities Conference entitled “Healthy U for a Healthy Community: Scholarship in the ‘Real World,’” at the Living Learning Center and Murtha Center. Beginning with the Faculty Resource Center’s Faculty Teaching Showcase on April 5 (Patty Wharton-Michael) and continuing on April 6 from 9:00 am - 5 pm with panel presentations, workshops, posters, and a keynote speaker (Deepu Gowda, MD of Columbia University), over 300 people participated including faculty (22), students (22), invited scholars (7), community leaders (16), and attendees (245+) from our campus and the community at large. Eighteen unique panels, workshops, and poster sessions demonstrated how interdisciplinary research beginning with faculty and student research may lead to healthy, applied scholarship that not only benefits our students but the entire Johnstown community. Also at the Healthy U Conference, she presented with Roelof DeVries, Liz Harkins, Christine Dahlin, April Kelly, David Kupas, and Eve Wilder on a panel entitled, “Inclusiveness for a Healthy Classroom Environment” which demonstrated their collective findings as Extended Diversity Fellows. She likewise presented the poster, “’Normalizing’ Diversity in the Public Speaking Classroom,” and the collaborative workshop, “Metaphors Matter” with members of Indiana University Purdue University Indianapolis. In addition to the Healthy U, she also presented at the Eastern Communication Association Conference in Pittsburgh on April 26 with “Diversity-Enhanced Narrative Speeches: Topics and Assignments for Inclusive Instruction.”

An essay about the recent book by Kamal Verma, Understanding Mulk Raj Anand: His Mind and Art (2017), by Rumina Sethi (a widely published international scholar) appeared in The Tribune, a reputable English daily published in Chandigarh; Professor Sethi was the keynote speaker at the New Delhi Book Launch even organized by the US Embassy at the American Center and moderated by US Ambassador to India, Richard Verma, son of Professor Verma. Read the Tribune essay »

Pitt-Johnstown instructor Neil M. Coleman and the late professor emeritus Uldis Kaktins teamed with researcher and Pitt-Johnstown alumna Stephanie Wojno to analyze the hydraulics of the South Fork Dam to challenge the 127-year-old findings of the cause of the 1889 Johnstown Flood. Learn More » 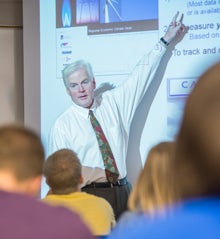 The MMA’s competition is held each year to recognize outstanding university marketing educators from around the nation. McGrath was one of the top three finalists this year and received the 2015 Teaching Excellence Award. Learn More >

McGrath also led a research team in a major research project to measure the economic impact of tourism at heritage sites throughout Pennsylvania. Learn More > 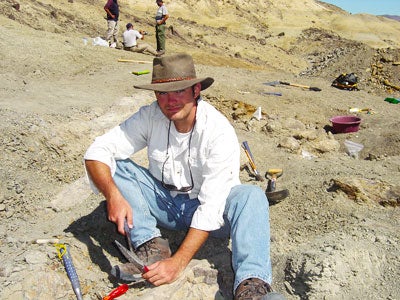 The account of this discovery was reported in the September 2014 Scientific Reports article in Nature.com and, according to Altmetric.com, the report is the 35th ranked academic paper of 2014. Learn More >

His demonstrations have earned international recognition, including 19 appearances on The Tonight Show with Jay Leno. He retired after the 2016 spring term and a memorable last lab. Learn More >

“Becky’s lectures, labs, and course materials bespeak a professor who is strongly dedicated to providing a truly enriching learning environment. She works hard to make her courses hands-on, and to keep her information relevant to students. Her students clearly prize her efforts to ensure that they learn the material. They say this on her evaluation and they even talk about this in the hallways.

“Becky’s love of teaching goes beyond how she works in the classroom. Her professional accomplishments encompass has a wide range of activities including the development of an app that brings computerized 3D models of chick and frog embryos to students, and effects of exposure of midges to Prozac and copper. Her persistent dedication to undergraduate research has always impressed me and surely impressed the award committee.”