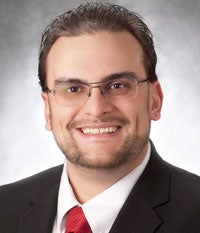 He was named the 2018 recipient of the Young Alumni Award, which is presented to accomplished alumni who are under 40 years of age and demonstrate a commitment to Pitt-Johnstown. He was honored at the annual Alumni Association Gala in April 2018.

Sernell has been an active member of the Pitt-Johnstown Alumni Association Board of Directors and project committees since 2012.

He has served as chairperson of the Homecoming committee and established the Pitt-Johnstown Alumni Golf Classic.

Sernell is he founder and President of Eagles Ridge Industries, LLC, and president of the Geistown Borough Council.

He received the 2016 Distinguished Service Award from PA State Association of Boroughs as well as the 2017 Governor’s Award for Local Government Excellence in the field of Promoting Community and Economic Revitalization.